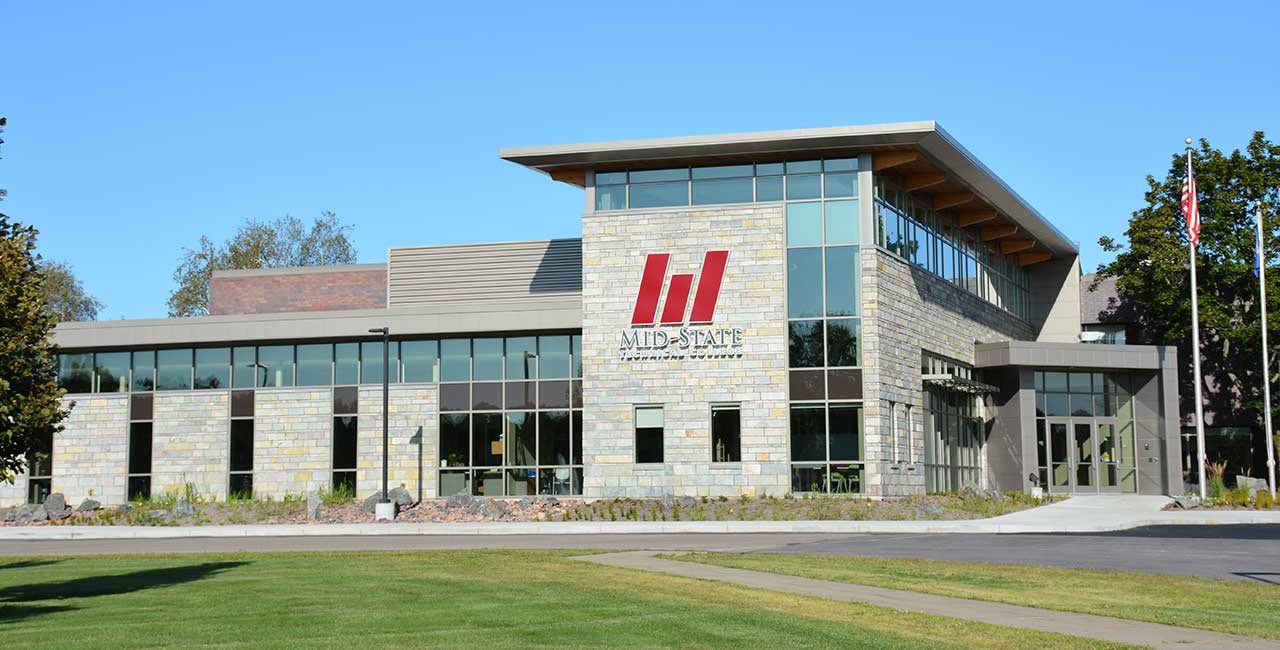 Today Mid-State Technical College is known as a provider of dynamic, hands-on technical training that prepares our students for success in today’s most in-demand careers. We’re incredibly proud of our mission to transform lives through the power of teaching and learning—and just as proud of the hundred-year journey that made us who we are today.

The need for "industrial" education was recognized early in central Wisconsin. Even before Wisconsin's Legislature created the system of Public Industrial, Commercial, Continuation and Evening Schools in 1911, local programs were being offered in Marshfield and Stevens Point.

In Marshfield, evening classes had been held in the old Washington School since 1902, under the auspices of the public school board. Roy J. Carver, hired in 1917, was the first evening and day class director. The Stevens Point city vocational program began in 1911 with classes in second-floor quarters downtown. Arnold Johnson was the first director. The original vocational school facility in Wisconsin Rapids, the Witter Manual Training School, was named in honor of Jeremiah D. Witter, an early attorney, jurist, banker, and school board member who became chief stockholder in the first pulp mill located in Grand Rapids. Upon his death, the school received $50,000. The money was used to build and equip the Witter School, which was completed in 1907. At that time, the Witter School and the Stout Manual Training School at Menomonie were the only two such institutions in Wisconsin. E.S. Hayward was hired as the first school administrator at Witter, and he was replaced by W.A. Sprise in 1919.

Cooperative programs between the local public schools and the vocational schools soon began to emerge. Wisconsin Rapids and Marshfield shared facilities and instructors, and vocational schools in all three cities provided programs for employment training. Marshfield's city council appropriated money to build a new vocational and junior high school building in 1918. The building was completed and occupied in 1920. It was dedicated to the memory of Sgt. Willard D. Purdy, a United States Army hero during World War I. An addition to the building was completed in 1926.

In the late 1930s, Stevens Point programs were moved to the old Emerson High School, where they remained until the new school on Michigan Avenue was completed in 1962. For many years a cooperative program with nearby P.J. Jacobs High School provided shop facilities for high school students in the present vocational school building.

In 1961 the Legislature changed the names of the schools to "Schools of Vocational, Technical and Adult Education". In the fall of that year, full-time postsecondary education began at Wisconsin Rapids, with seven students enrolled in Accounting and 13 in Secretarial Science, both one-year programs. In 1962 the first full-time program, Electronic Servicing, was offered at the Stevens Point school. In 1965 the Wood County Teachers College was closed, and the facilities were sold to the city of Wisconsin Rapids for vocational school use. The first two-year program, Marketing, was initiated in 1964, and additional one- and two-year programs were added as facilities were remodeled.

Following legislative action in 1965, the Wood County Board of Supervisors submitted formal resolutions to encourage the Wisconsin Board of Vocational, Technical, and Adult Education and the Coordinating Council of Higher Education to form a vocational-technical district in central Wisconsin. Approval to form an organized district was granted, and Area Vocational, Technical & Adult Education District 14 became a reality on July 1, 1967, with the former Marshfield and Wisconsin Rapids schools becoming part of the district. Upon formation of the district, Earl F. Jaeger was hired as director, and efforts were begun to convert the Wisconsin Rapids school into a comprehensive center.

In January 1968 a review team conducted a program study within the institution. Three associate degree program evaluations (Accounting, Mechanical Design Technician, and Secretarial Science) were successfully completed in spring of that year. By fall, three others (Marketing, Civil-Highway Technology, and Instrumentation Technology) had been completed, qualifying the school for "technical institute" status by the Wisconsin Board of VTAE on March 20, 1969. Later that year, the first full-time diploma program (Medical Assistant) was offered at Marshfield.

Organization of Area Vocational, Technical & Adult Education District 14 was completed on July 1, 1970. The district was designed to include all of Wood County, most of Portage and Adams counties, and portions of Juneau, Marathon, Clark, Waushara, and Jackson counties. The Stevens Point City Vocational School became part of the district at that time. The state board approved a change in district and school names from numbers to generic names in September 1972. As a result, District 14 became Mid-State Vocational, Technical and Adult Education District, and the district-wide institution became Mid-State Technical Institute (MSTI)-Marshfield Campus, Stevens Point Campus, and Wisconsin Rapids Campus.

Phase I of the Wisconsin Rapids Campus building program (Automotive Mechanical-Industrial building) was started in October 1971 and occupied in the fall of 1972. Phase II construction (Laboratory-Technology and Academic-Administration buildings) received approval in December 1972. Construction started in June 1973 and was completed in January 1975. Phase III (Student Services and Educational Resources buildings) started late in 1974 and was completed in January 1976. Phase IV (Academic Multipurpose building and Diesel Shop addition) was approved in May 1977. Construction began in October 1977 and was completed in December 1978.

At the November 18, 1996 Board meeting, Mid-State Technical College Board of Directors voted to move forward on an expansion for the Adams County Center. The plan called for an expansion of 3,900 square feet to the site. Details of the $425,000 project include the addition of two classrooms, a learning resource area, additional office space, a student lounge, demolition of a garage on the Center’s north end, and construction of a parking lot. Construction began March 1, 1997 and was completed in September 1997.

Construction began in the fall of 1999 and was completed in late spring of 2000.